So IE6 is as old as the hills and should just go away, however the fact is that some people still have an use IE6 unknowingly. As a result its a good idea to make sure websites at least work and are readable in IE6. I also find that if youcode the xhtml and css to show correctly in IE6, it will look ok in all other browsers.

It lets you compare a website (you have to browse to a local html file) in IE6, IE7 and IE8 (if you have IE8 installed) in a side by side fashion. It renders an image of the website in both browsers, so you wont be able to see a:hover effects or other javascript behaviours. Still it sufficed for me, and saved me the hassle of using online services, or trying to install IE6 manually. Oh, and of course it shows up the PNG images with alpha transparency. See below for an example website compared in IE6 and IE7. 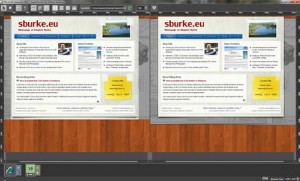 As for people who try and code for IE6, you get used to the quirks and know which css properties will fail and which will work ok. Typically css positioning will fail. Its best to use floats as much as possible. I’ve also found that IE7 has some quirks also. As a result its a good idea to test using the MS Expression SuperPreview. Also is possible to use compatibility mode in IE8 which will render websites as they would appear in IE7.