Hetzner recently started offering VPS (Virtual Private Servers) since October 2010. Being a Hetzner customer and avidly interested in virtualization, I was keen to find out what setup they had in place and what functionality they offered VPS customers (I’m thinking of moving from Xen to KVM myself). While they did offer 1 month free during their testing phase back in May 2010, I found out a little too late. Over the Christmas I had some time, so I said I’d try the VQ7 for a month. Below is the information I gleaned from the VPS itself and the Hetzner Forums. Note the VPSs and (host) setup may have been changed since. This information is valid for a VQ7 obtained in December2010-January2011.

Tests and results varied. This is in no way complete. Results were slightly higher when I got the VPS first (with ~8000 Requests Per Second with Apache, and ~19 Seconds for compress-gzip).

So people were asking about uptime of the VPS. As I host a number of VPSs I was also keen to find out how uptime and kernel updates to the host would be applied and handled by hetzner.

During the week, I came back to find the following in a screen session I had running on my main server:

Clearly the host had went down for a reboot. I checked www.hetzner-status.de and sure enough the reboot was scheduled. I’m not sure how much notice was given. I should have received an email but it was my own fault I wasn’t subscribed. The downtime was 10 minutes. I was suprised that it was done during the middle of a weekday (as opposed to out of office hours). Below is the image of the scheduled downtime notice from the hetzner-status.de website. This was the first downtime in 60 days. 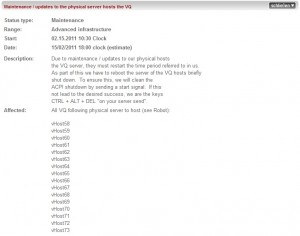 After keeping an eye on http://www.hetzner-status.de I found that Hetzner was now “pausing” VPSs when the KVM host had to go down for a reboot. This has pros and cons. The advantage been that services will remain running on the VPS when unpaused/started. If the KVM host reboot is quick, connections to your VPS may remain alive. The disadvantage been that you might never know if there were issues and that the KVM host had to be rebooted. Thus typing “uptime” may not reflect an accurate figure.

I also found that ports 59XX on the KVMhostIP were no longer accessible from the Internet or from an internal Hetzner IP (crossed out text above to reflect this).

An accurate reflection of uptime?

Hetzner do seem to be listing all reboots and pauses of VPSs on their status website so you know if anything did happen. You can also subscribe for email and news alerts. 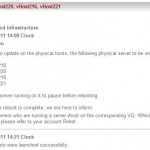 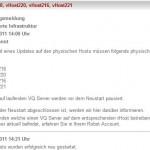 IPv6 Subnet (/64) is now available for free. Simply log into the hetzner robot, and you can request it automatically (automated setup).

This entry was posted in IT, Virtualization and tagged KVM, VPS. Bookmark the permalink.